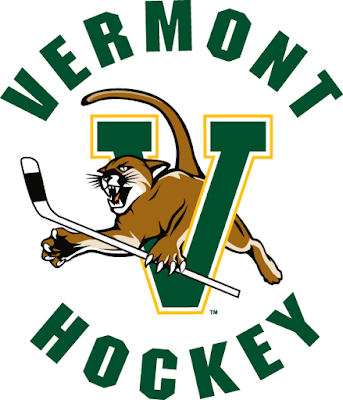 The #17 Quinnipiac Bobcats return to their out of conference schedule when they welcome Hockey East foe Vermont to Hamden. These two programs met a season ago in the championship game of the Friendship Four tournament in Belfast, Northern Ireland which the Catamounts won 5-1 over the Bobcats. Vermont's Ross Colton was a major factor in that game with two goals and an assist while Craig Martin was the lone Bobcat goal scorer. Goaltender Andrew Shortridge got the start in that game and gave up all five goals. This season, Vermont opened with a split at home against Colorado College winning 3-0 before falling the next night 4-3 while Quinnipiac tied Boston College 1-1 before dropping a heartbreaking 3-2 game in overtime to #2 Boston University last Sunday. Vermont welcomes 12 freshman to its team to replace the 10 departed seniors from a year ago on a team that finished 20-13-5. Quinnipiac is 1-1 all time against Vermont last winning back in the 2007-2008 season at Vermont in the championship game of the Catamount Cup.

Vermont lost three of its top five scorers but returns 70% of its scoring which includes Ross Colton and Brian Bowen who tied for second on the team a season ago in points. Colton, a 2016 4th round pick of the Tampa Bay Lightning is off to a hot start with four goals in his teams first two games. Bowen already as three assists for the Catamounts. Vermont will need increased production from  Jarrid Privitera, Craig Puffer and Derek Lodermeier to pick up the slack from the departed seniors. Its also time for Liam Coughlin to show why he was a 5th round by Edmonton back in 2014. Coughlin has mustered only 23 total points in his two prior seasons in Burlington. The Catamount power play is off to a very good start at 33% (3 of 9) with Colton scoring two of them. Shutting down Ross Colton has to be the Bobcats focus especially with his hot start and the fact he torched Quinnipiac a season ago.

Sophomore goaltender Stefanos Lekkas is between the pipes and he has picked up right where he left off after a very solid freshman season. He opened the season with a 33 save shutout of Colorado College before struggling a bit the next night against them, giving up four goals on 27 shots. He was strong a year ago with 40 saves in the win against Quinnipiac and brings good athleticism for a small goal-tender.

Quinnipiac needs to get into the win column especially after last weekend's near misses and end results. Despite these being non conference games these are important for pairwise implications even at this stage of the season. The team needs to be some confidence especially heading into ECAC play soon and a win would help to get that started.