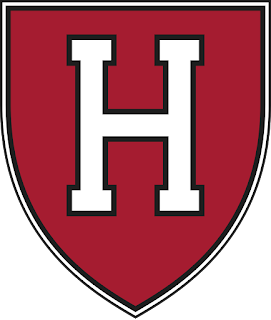 In our final ECAC team preview on the BobcatsHockeyBlog we look at our projected 1st place ECAC finisher, the Harvard Crimson who finished tied for 1st a season ago in the ECAC standings.

The Harvard Crimson returned to the Frozen Four a season ago for the first time in 23 years but finished the season two wins shy of the program's first National Championship since 1989. Expectations are high once again in Cambridge as the Crimson look to return to the Frozen Four in consecutive years for the first time since the 1986 and 1987 seasons. The host of the Frozen Four this season is St. Paul, Minnesota which was the site of Harvard's only national championship back in 1989. It's current head coach Ted Donato, was the most outstanding player of that tournament.

For Harvard to have similar success as a season ago it must find players to replace its three leading scorers who graduated in Tyler Moy (45 points), Alexander Kerfoot (45 points) and Sean Malone (42 points). Sixth leading scorer Luke Esposito (36 points) also graduated. 54% of the Harvard goals scored will have to be replaced but they have the players in place to get that done. Junior Ryan Donato (40 points) will be expected to carry the load and is a potential Hobey Baker candidate. Fellow junior Lewis Zerter-Gossage (25 points) and sophomore Nathan Krusko (17 points) will have to have increased production for the Crimson. Freshman Jack Badini is the prized freshman of the Harvard freshman forwards being a 3rd round pick of the Anaheim Ducks and having 28 goals with the Chicago Steel in the USHL. Other freshman that will be expected to contribute immediately are Henry Bowlby and Ben Solin. Harvard will need to generate some increased offense from its defense as well to make up for the loss of so many top forwards.

There is no better defenseman in the ECAC than Adam Fox who exploded on the scene with 40 points (6 goals, 34 assists) in his freshman season. The Calgary Flames draft pick is an elite pucker mover who creates offense from the blue line. The defense lost only Clay Anderson from its starting lineup. However they return a ton in sophomore John Marino (Edmonton Oilers draft pick) and senior Wily Sherman (Boston Bruins draft pick) along with senior Jake Horton and two sophomores Viktor Dombrovskiy and Jacob Olson. They also add Reilly Walsh a 3rd round draft pick of the New Jersey Devils who should a bunch of minutes on the blue line as well. The defense is deep and loaded to help make another run at a championship for the Crimson.

Harvard got an important piece back when Merrick Madsen came back for his senior season instead of signing with the Philadelphia Flyers. He started every game for the Crimson and finished with a 2.11 goals against average with a .923 save percentage and 3 shutouts. Madsen will be expected to be a workhorse once again for Ted Donato's team.

In closing the Crimson should be the cream of the crop along with Quinnipiac in the ECAC this season. While the offense may see a bit of a drop off, they have more than enough on defense and with their goal-tending to compensate for it in order to make another deep NCAA run.