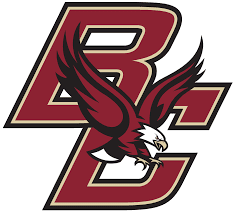 The Quinnipiac Bobcats men's ice hockey team kicks off its 2017-2018 campaign with a road trip to Chestnut Hill, Massachusetts Friday night to face off against perennial power Boston College. It will be a much different Boston College team than what many have been accustomed to seeing in the past. Gone are the teams top five scorers from a season ago with sophomore Colin White the lone underclassmen departure of that bunch. Boston College enters the season without a single senior on its roster which is a first for Jerry York in his 46-year collegiate head coaching career. The Eagles enter the season as one of the youngest teams in the country so their will be some growing pains naturally. This is a team that should be better in January, February and March than they are right now.

Early on this season it might be a challenge for Boston College to score goals especially after losing their top four scoring forwards who scored 30 or more points a season ago. Coupled with the fact that prized recruit Eeli Tolvanen a 1st round NHL pick could not get past admissions at Boston College this years team took a hit before the season even started. Tolvanen ended up signing a professional contract with Jokerit of the KHL but his loss with definitely be felt. The Eagles will have to rely heavily on Christopher Brown, David Cotton and JD Dudek who had 26, 24 and 22 points respectively a season ago. Newcomers Aapeli Räsänen, Logan Hustko and Jacob Tortora are expected to contribute as freshman. Hustko and Tortora are alums of the US National Developmental Program.

The Eagles defense should be its strength this season as it returns five starters from a season ago including Casey Fitzgerald and Michael Kim who had 22 and 21 points respectively and were a combined plus 25. Collectively the Eagles returning defenseman were a plus 52 last year. Sophomores Luke McInnis, Connor Moore and Jesper Mattila should continue to improve. Jerry York will need to rely on the defense to win this team some games in the early part of the season until they can get the offense going.

Quinnipiac is 2-0 all-time against Boston College winning in the 2016 Frozen Four semifinals in Tampa and winning a season ago in the Three Rivers Classic in Pittsburgh. This is the first campus game between the teams and Boston College will make a return to trip Hamden next season.