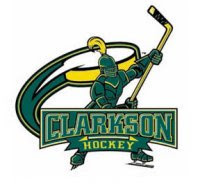 Today on the BobcatsHockeyBlog we look at our projected 4th place ECAC finisher, the Clarkson Golden Knights who are coming off an 6th place finish in the ECAC a season ago.

Clarkson had their first back to back winning seasons since the 2006-07 and 2007-08 seasons when they won 20 plus games and reached the NCAA tournament. This is the 7th season of the Casey Jones era and has four winning seasons in his first six years at the helm in Potsdam. Expectations are high in North Country for the Golden Knights who are looking to reach the NCAA tournament for the first time in 10 years.

The team lost its top four leading scorers and a total of 47% of their goals from a season ago. Leading scorer Sam Vigneault departed a year early to sign with the Columbus Blue Jackets as a free agent while Troy Josephs, Jordan Boucher and defenseman James de Haas all graduated. All three of those seniors were big offensive contributors. However, Clarkson had a handful of freshman contribute last season who are expected to be major contributors this season. Sheldon Rempal (23 points), Devin Brosseau (21 points), Nico Sturm (21 points) and Haralds Egle (17 points) all had very good freshman years and will be looked upon to pick up the majority of the production as sophomores this season. Clarkson has four incoming freshman forwards who produced a lot of offense in juniors last year. Kevin Charyszyn had 30 goals and 50 total points for Waterloo in the USHL while Grant Cooper was the CCHL's 7th leading scorer with 67 points. Jack Jocome lead the OJHL in scoring with 91 points (34 goals, 57 assists) and Josh Dickinson had 66 points in the OJHL. All four should factor prominently in the Golden Knights offense this year. The recruiting class took a hit when Vegas Golden Knights 6th round pick Nick Campoli could not clear NCAA Clearinghouse requirements and had to go back to the OJHL instead for this year. He is expected to be with Clarkson in the 2018-19 season.

The Golden Knights return seven defenseman who saw action in 15 games or more last year headlined by seniors Kelly Summers and Terrance Amorosa. The other four returning players are one junior (Aaron Thow) and three sophomores (Shane Kuzmeski, Greg Moro and Jordan Schneider). They welcome two freshman in Jere Astren and Connor McCarthy. Clarkson gave up 2.87 goals per game so that number will have to drop a bit if they want to see improvement from a season ago.

Goal-tending should be a strength of the team as Clarkson returns starting goaltender Jake Kielly who was strong a year ago as a freshman posting a 2.56 goals against average with a .911 save percentage and 3 shutouts in 36 games played. He will be backed up by two freshman in Chris Janzen and Nicholas Latinovich. I expect Clarkson to have a much improved defense with the amount of veterans they are returning plus Kielly manning in between the pipes.

Its very possible this is a Clarkson team that returns to Lake Placid and possibly a chance at an NCAA berth for the first time in 10 years. Casey Jones and his staff have the pieces in place and they just need to execute and stay healthy for their hard labor to come to fruition.