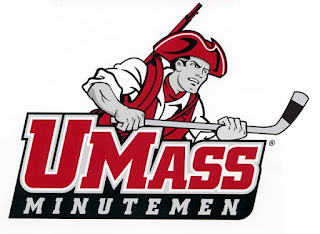 Coming off their first two conference wins, Quinnipiac now heads back into out of conference play with a home and home series with UMass Amherst that begins Friday night in Hamden and wraps up the next night up in Amherst at the Mullins Center. Quinnipiac is going to see a UMass team that turned over half the roster from a year ago. The Minutemen have 13 freshman with many of them seeing serious playing time for Greg Carvel's team as he looks to make them much more competitive than they have been in the past. They are off to a decent start this season at 5-6 with wins over Union on the road and Providence at home. With so much youth on the UMass roster, there have been good nights and some bad nights but the pieces are in place to be a very respectable team this year and pretty good in the years to come. All time Quinnipiac is 7-2-2 against the Minutemen.

The UMass offense is very young but has some intriguing talent. They only average 2.78 goals per game but 10 of the forwards who have seen a bunch of game action are either freshman or sophomores so you can expect growing pains. Four of their top five scorers are freshman with the lone senior forward being Niko Rufo (8 points). Two freshman in Oliver Chau (10 points) and Amherst native John Leonard (9 points) are the two top scorers for the Minutemen followed by Rufo. Freshman forward Mitchell Chaffee has 6 points while they are getting some contribution from two of the freshman defenseman in Cale Makar (6 points) who was the 4th overall pick by Colorado in the 2017 draft along with Mario Ferraro (5 points) who was drafted in the second round by San Jose in the same draft. UMass has a power play that has struggled to a clip of 14.29% (7-of-49) while the Quinnipiac penalty kill has improved to 80.4% (37-of-46). The Bobcats need to use their experience on defense to force the young Minutemen forwards into mistakes in order to generate turnovers which can lead to quality opportunities for Quinnipiac.

UMass has struggled on defense this season giving up 3.18 goals per game. They have some high end talent with Makar and Ferraro that can provide offense as well as be consistent on the blue line. However this defense is just so young with freshman and sophomores manning the blue line that their lack of experience is hurting them. The lone senior back there is Jake Horton while sophomores Jake McLaughlin and Josh Couturier see a lot of minutes on the blue line. While Quinnipiac hasn't been lighting up the scoreboard offensively like they have in the past they have some experience up front along with some talent to make UMass pay if it struggles on defense. The Minutemen have been average on the penalty kill at 79% (49-of-62) while Quinnipiac has seen some improvement on the power play recently outside of the Yale game at 17.50% (7-of-40).

The Minutemen have gotten really poor goal-tending from both freshman Matt Murray (3.16 GAA, .894 save %) and sophomore Ryan Wischow (3.04 GAA, .895 save %). Murray has seen the majority of the starts with 8 but Wischow has the two best wins of the season for UMass beating Union and Providence. With the way these goaltenders have both struggled they probably will each get a game in goal. Either way Quinnipiac must capitalize on how inconsistent they have been and just shoot the puck consistently

Quinnipiac needs to build off last weekend's sweep and has to come away with two victories over this holiday weekend because at this point they can not afford many more pairwise slip ups especially with a loss to RPI on the season. They need to get strong goal-tending, the defense to play well, have a strong fore-check, hunt the puck and get some timely goal scoring in order for the results to go in their direction.