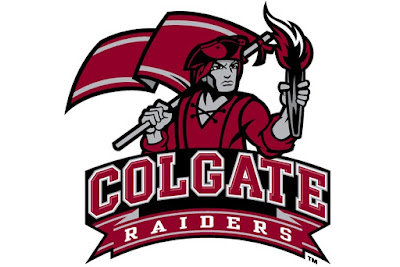 The #11/12 Quinnipiac Bobcats welcome the Colgate Raiders on the back leg of the opening weekend of ECAC play after dropping the Friday nights game 2-1 to Cornell. The Raiders are 3-2-4 to begin the season but outside of two games against New Hampshire (both losses) they have yet to be fully tested. They tied a solid Princeton team last night in New Jersey. Head coach Don Vaughn has a youth movement going on at Colgate this season with 17 of the 27 players on the roster beither either freshman or sophomores with many of them their key players. While the expectations in Hamilton are low, this will be a season for the young players to develop and get experience to take the next step in the seasons to come.

The majority of the Colgate offense is made up of underclassmen who have gotten off to solid starts. Sophomores Bobby McMann (6 points), John Snodgrass (5 points) and Jared Cockrell (4 points) are leading the way up front for the young freshman that Colgate is going to have to rely on this season. Collectively as a team,they are averaging 2.1 goals per game which is not a lot but might be the difference when you you have Colton Point in between the pipes. More on Point below. The Colgate power play has been one of the worst in the country at 7.89% (3-of-38). However the Bobcats penalty kill which historically in the past has been good has started out the season poorly at 73.9% (17-of-23).

The Colgate defense has been a strength in the game's that Colton Point has started yielding just 8 goals in 7 games. Juniors Willie Brooks and Ken Citron are the experience veterans back on the blue line while the rest of the core is a mixture of sophomores and freshman. They struggled in a pair of games against New Hampshire giving up 10 goals combined in two games (Point did not play). They shut down a very good Princeton offense on Friday night in a scoreless tie. Overall the team is giving up 2 goals per game this season which is vast improvement from a season ago when they gave up over 3 goals per game. The penalty kill for the Raiders has also been a solid 84.6% (33-of-39) which should help since Quinnipiac has struggled on the power play to start this season.

Colgate's X factor is goaltender Colton Point. While he missed the UNH series with an injury he has been flat out dominant for Colgate with a .964 save percentage and 1.04 goals against average leading the Raiders to a 3-0-4 record in his starts. While the opponents have no been top notch in his starts, he has the ability to steal games this season for Colgate. The 6'4, 5th round draft pick of the Dallas Stars should carry the bulk if not all of the Colgate load in net for the entire season. He has a chance to be one of the better goaltenders not only in the ECAC but the entire country if he keeps up his great start to the year.

Quinnipiac needs a bounce back effort after really struggling for the majority of the game Friday against Cornell to earn a split of the weekend in ECAC play. It's likely Thomas Aldworth won't play after sustaining an injury and despite a solid game from Andrew Shortridge I would expect Keith Petruzzelli to get the nod in goal against Colgate as Rand Pecknold has been alternating his goaltenders when the Bobcats have two games in a weekend.