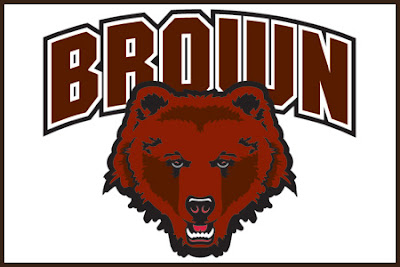 In the month of September the BobcatsHockeyBlog will be counting down to the start of the 2017-18 ECAC season with a look at the upcoming year for each of the twelve programs. Today, we start with our projected last place finisher, the Brown Bears.

ECAC Tournament: Lost to Quinnipiac 2-0 in ECAC First Round

Since reaching the ECAC championship game at the end of the 2012-13 season it has been a downward trend for Brendan Whittet's program as the Bears won 11, 8, 5 and 4 games since winning 16 games in the '12-'13 campaign. The Bears 2016-17 season was the worst in Whittet's eight seasons in Providence and the programs worst since the year before Whittet took over as coach of the program.

The bad news is Bruno was one of the worst teams in the country scoring goals a season ago with just 66 the entire season. The good news is that 60 of the 66 goals are returning for the Bears which includes three key seniors in Charlie Corcoran, Sam Lafferty and Max Willman. Those three players combined for 39 goals and and 50 assists. They played on a line together at times last season and could be one of the better lines in the ECAC should they find themselves together again. A couple of freshman in forwards Chris Berger and Colin Burston should help contribute to boosting the offense but it likely won't be enough to make a huge difference in moving the Bears up in the ECAC standings.

The Bears were the second worst team in the country on defense giving up 4.26 goals per game. They will need to see some improvement from some of the returning players in order to avoid another poor season on the blue line. They added two freshman in USHL veterans Tony Stillwell and Anea Ferrario who have 229 games of experience in the league combined. Both of those players should be able to help improve a poor defense from a season ago. Gavin Nieto is expected to be the starter in net and while his stats don't look great from a season ago, a lot of it had to do with the players in front of him.

It's been 25 years since the Bears last NCAA appearance and over 40 years since they last appeared in a Frozen Four. Don't expect either for the Bears this season as the program looks to just improve upon its four wins from a season ago.

Posted by Jonathan Singer at 11:45 AM