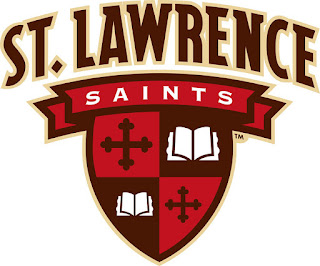 Today on the BobcatsHockeyBlog we look at our projected 6th place ECAC finisher, the St. Lawrence Saints who are coming off a 4th place finish in the ECAC a season ago. Jack Lyons of the SLUHockeyblog was gratuitous enough to write a guest preview for the BobcatsHockeyBlog on Saints this season. You can follow him on twitter @sluhockeyblog.

ECAC Tournament: Lost to Quinnipiac in the ECAC Quarterfinal series 2-1

With a new head coach, Mark Morris, at the helm the Saints battled injuries throughout the season, with only two defensemen playing in every game: senior Ben Masella and rookie Ben Finkelstein, a sixth-round draft pick of the Florida Panthers. SLU ultimately failed to advance to Lake Placid for a third straight year.

Finkelstein will have to play an increased role for the Saints this year, who graduated four starting defensemen, and saw all-American goaltender Kyle Hayton transfer to Wisconsin. Defense has been the staple of St. Lawrence hockey for the last three seasons, but that could change this year. Expected starter Art Brey has shown he can be a solid goaltender over the past two seasons, and now he’ll get a chance to prove his worth as a starter.

The Saints appear to have the most talent at forward they’ve had since 2013-14, when they boasted both Carey brothers and Jeremy Wick, all who finished with more than 30 points. Coming off an injury plagued season, Mike Marnell’s health will be of crucial importance for the Saints. He scored 13 goals in 15 league games last season as a junior, but battled injuries throughout the year. If he is healthy, he can be a game-changing forward with speed and the ability to finish. They also welcome Cade Gleekel, a former Mr. Hockey finalist who had 22 goals in 23 games during his senior season at Benilde-St. Margaret’s and put up 45 points in 57 games with Merritt in the BCHL last year. Mike Laidley returns from injury as well and should center the Saints top line.

The defense will have some serious adjustments to make. Losing Gavin Bayreuther, Eric Sweetman, Ben Masella and Mike Graham means the Saints have to replace four starting defensemen. Their two returners, Finkelstein and Nolan Gluchowski, are solid two-way defenders, but neither has ever had to shoulder the load as the number one defender. How they perform in the early season will be something to keep an eye on.

In short, SLU’s offense should be the best its been in several years, considering they still have two great puck-moving defenseman and welcome another in Jake Stevens, but the defense and goaltending loom large as points of concern for the Saints in 2017-2018. With as much roster turnover in key spots as the Saints have, it’s tough to imagine them locking up a fourth straight bye in round one of the ECAC tournament.