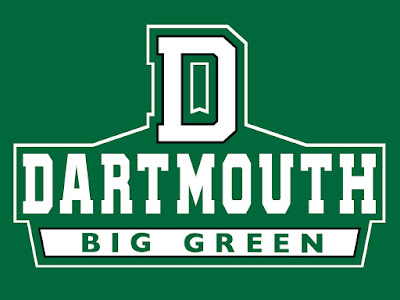 Today on the BobcatsHockeyBlog we look at the projected 9th place ECAC finisher, the Dartmouth Big Green who are coming off a 9th place finish in the ECAC.

ECAC Tournament: Lost to Yale 2-0 in ECAC First Round

Expect more of the same from Dartmouth this season as you have seen in the past. They will compete but won't be good enough to be in the top four and will be battling just to get home ice in the first round of the ECAC tournament. The Big Green are a program that hasn't reached the NCAA tournament since the Jimmy Carter administration which was 38 years ago. I would expect that streak to continue as I see this is a program stuck in neutral that really doesn't make a huge effort to make hockey a priority at the prestigious Ivy League college. The Big Green's coach Bob Gaudet has had some decent seasons in the past but rarely has his program been a huge factor in the ECAC with the 2016-17 season's trip to the ECAC semifinals being a highlight recently for the program.

The team's leading scorer has departed in the recently graduated Troy Crema whose 29 points were six more than Corey Kalk who will be a senior this year. Dartmouth will need increased production from Kalk, Will Graber, Alex Jasiak and Cam Strong. Others will need to step up as well if Dartmouth is to be better than a bottom four team in the league.

One thing that the Big Green will need to see vast improvement is on defense. Dartmouth last season gave up 3.58 goals per game which was well into the bottom third of the NCAA. Four upperclassmen return and the Big Green also bring in three freshman on the blue line with two of them coming from the USHL in Joey Matthews and Brendan Demler. Senior Devin Buffalo returns in goal but he struggled at times last season and finished with a sub .900 save percentage and a goals against average over 3.

With 17 of the 29 players on the roster underclassmen it will be a tough season in Hanover, New Hampshire. In order for Dartmouth to be better than expected they will need the defense and goal-tending to really improve along with finding more scoring. The Big Green will play teams tough but they just won't be good enough to be considered a big challenge in the ECAC.

Posted by Jonathan Singer at 5:01 PM