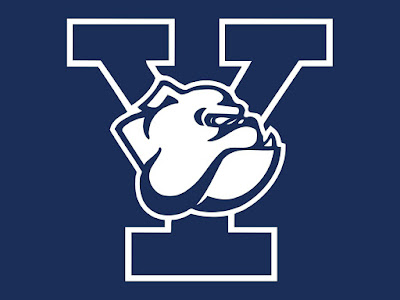 Today on the BobcatsHockeyBlog we look at our projected 7th place ECAC finisher, the Yale Bulldogs who are coming off an 8th place tie in the ECAC a season ago.

The 2016-2017 campaign ended with only the second losing season of the Keith Allain era at Yale and the first since 2006-2007 which was Allain's first season in New Haven. In his 11 seasons at Yale, Allain has taken the Bulldogs to six NCAA tournament appearances along with winning the 2013 NCAA National Championship. He has been the most successful coach in the history of the program and set a standard for excellence with the program.

Yale will have to replace 43% of the goals scored last season as John Hayden who led the team with 21 goals graduated along with Frankie DiChiara (10 goals), Mike Doherty (7 goals) and Chris Izmirlian (5 goals). They return junior leading scorer Joe Snively (39 points) who is a preseason All-ECAC 1st team selection. Two others expected to be a big part of the offense are senior Ryan Hitchcock and junior Ted Hart. Yale will need more production from the likes of Charlie Andrew Gaus, Robbie DeMontis, Luke Stevens and the Smith twins (Evan and Mitchell) to make up for the scoring they are losing.

Yale returns five starting defenseman and adds Phil Kemp, a 2017 7th round pick of the Edmonton Oilers who played the last two season with the United States National Team Developmental Program. They should see improvement to a defense that struggled at times a season ago. Players like Adam Larkin and Charlie Curti also provide some offensive punch on the blue line as well and will need that contribution once again. Sophomore's Billy Sweezey and Chandler Lindstrand should see themselves much improved as well as Sweezey was tied for the team lead as a plus 13 a season ago. Sam Tucker is the only goaltender returning that saw game action last season and finished the year with a 3.05 goals against average and a .899 save percentage. Sophomore Corbin Kaczperski and freshman Nicholas MacNab figure to battle it out for the starting job with Tucker.

I cannot see a Yale team having back to back losing seasons under Keith Allain who has built a consistent program in his tenure in New Haven. Some of the younger players likely will get better but to me they need to find consistent goal-tending as well. It's possible that Keith Allain misses upwards of six games this year being part of the USA Hockey staff at the 2018 Winter Olympics with Quinnipiac, Princeton, Cornell and Harvard in that stretch of games. That will be a challenging part of the season for Yale to see how they will play without their leader behind the bench. This is a team that should get home ice for the first round of the ECAC playoffs as I just don't think they will be good enough to reach the top four in the ECAC to get a first round bye.

Posted by Jonathan Singer at 9:27 AM