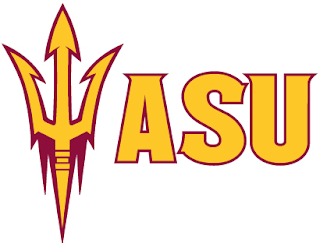 Quinnipiac now wraps up their non conference schedule this weekend with a trip out to the desert to face Arizona State for a pair of games. The Sun Devils this season are 7-13-4 but have wins over UMass Lowell, Northern Michigan, Michigan Tech and Massachusetts, all teams that are .500 or over. They have played competitively in a lot of their games this season but they still are not that talented a team. Quinnipiac has played Arizona State three times in their history and is 2-1 against them with all the game being played in Hamden. The Sun Devils lack a lot of talent and the fact that they have yet to finalize an arena or a conference to play in, will continue to hurt their future pipeline of recruits.

The Sun Devil offense has struggled this season to a tune of 2.21 goals per game which is 56th nationally. Arizona State's top four scorers are all underclassmen so there is a bit of a youth movement with this team as they have made a full transition to Division I players. Every player that scored in their win against Quinnipiac has returned including Anthony Croston (11 points). The leading scorer is defenseman Brinson Pasichnuk (16 points). Sophomore forwards Brett Gruber (15 points) and Tyler Busch (14 points) along with freshman Johnny Walker (12 points) round out the Sun Devils that have double digit points. Its a weak power play for Arizona State converting on just 10-of-92 chances (10.9%) good for 58th in the country. Quinnipiac has a very solid penalty kill which is probably one of the strengths of their team right now so this area of special teams will favor the Bobcats.

On defense Arizona State isn't very good giving up 3.38 goals per game which is tied for 51st in the country in that category. Brinson Pasichnuk is probably the teams best defensman as he brings some good offense to the blue line. Junior Jakob Stridsberg and freshman Jacob Wilson are a minus 17 and minus 13 respectively. The defense did play really well in their previous game against UMass Lowell shutting them out 4-0. They are a decent team at blocking shots as they block 13.5 shots per game. The strength is of the team in the penalty kill which is 12th best in the country at 84.8% (89-of-105). Quinnipiac has had struggles this season on the power play though the only two goals they scored against Harvard came way of the man advantage. However I would still take Arizona State in this category as they have been strong this season killing off penalties.

The man in between the pipes is sophomore Joey Daccord. You should remember Daccord as the goaltender who made 53 saves in a 4-2 win over Quinnipiac back on January 28, 2017 in Hamden. He was the big reason why Arizona State won that game that helped keep Quinnipiac out of the NCAA tournament last year. This season Daccord is 7-11-4 with a 3.20 goals against average and a .913 save percentage. He has shown he has the ability to come up big in games. Last week he shut out Lowell at home so he is definitely someone that can steal a game for Arizona State.

After an 0-1-1 weekend last week in ECAC play, Quinnipiac needs to wrap up the non conference play on a high note and come back from out west sweeping these games to build some confidence as they head down the stretch of conference play. Arizona State plays better at home with four of their seven wins coming in the desert of the sun. Quinnipiac needs to treat this trip as business more than a warm vacation out of the the northeast as they just need to play well.