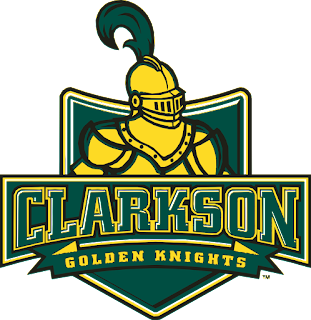 We are already into February and Quinnipiac has yet to face any of the North Country teams. Well that is about to change this weekend when they welcome Clarkson and St. Lawrence to Hamden starting with the Golden Knights on Friday night. Clarkson has slumped a bit going 1-1-2 in their last four games to fall out of first place in the ECAC but with a record of 19-4-3 they are comfortably in position to reach the NCAA tournament for the first time since 2008. Quinnipiac is coming off a 5-3 home loss to Princeton in which they gave up three power play goals. The Bobcats now sit at 10th place in the ECAC standings and an overall record of 9-14-4.

The Golden Knights are a match-up nightmare for Quinnipiac. They possess a ton of fire power up front that can score consistently. They are 8th in the country in scoring at 3.38 goals per game. The top line of Rempal-Sturm-Brosseau has combined for 80 points this season. Sheldon Rempal leads the team with 30 points himself and has 114 shots on the season and is the player Quinnipiac needs to put the most focus on. Nico Sturm and Devin Brosseau have 25 points apiece while freshman Jack Jacome (22 points) is likely to push Quinnipiac's Odeen Tufto for ECAC rookie of the year down the stretch. Three other players have 20 or more points in defensemen Terrance Amorosa (21 points) and Kelly Summers (20 points) while freshman forward Josh Dickinson has 20 points including 12 goals. This is another power play that can kill you as they are 5th in the country at just over 26% (30-of-115). Quinnipiac gave up three power plays to Princeton on Tuesday night and the talent that Clarkson has is better overall.

Clarkson is a strong defensive team giving up 1.54 goals per game which is second in the country behind ECAC leader Cornell. They block shots with over 13 per game. Every one of their blue liners is a plus player. There are not a lot of holes in the Clarkson defense. They are getting strong play from upperclassmen in seniors Terrance Amorosa (plus 15) and Kelly Summers (plus 12). Junior Aaron Thow is a plus 15. Quinnipiac has major scoring issues and expect Clarkson to be able to take away any time and space from the Bobcats in this game as they have very few options offensively. The Golden Knights are strong on the penalty kill at almost 87% (100-of-115) good for 7th overall in the country while Quinnipiac has struggled for much of this season on the man advantage.

Goaltender Jake Kielly has taken his game to another this season. A year after posting a 2.56 goals against average and a .911 save percentage as a freshman, he has exploded as a sophomore to a tune of a 1.59 goals against average and a .940 save percentage. He has been a brick wall for the Golden Knights this season. He really has had only one bad game this season when he gave up six goals to Harvard in a 6-6 tie but other than that he has been very good if not great all season. A year ago Quinnipiac only saw Kielly once and he beat the Bobcats 4-2 in Hamden.

On paper this is a major mismatch in favor of Clarkson. They do everything better than Quinnipiac. They excel on special teams. They have a strong defense and goal-tender and have played much more consistently for this season than Quinnipiac. For Quinnipiac to win this game its going to need strong goal-tending and some puck luck to go their way because they are just out manned talent wise against Clarkson in pretty much every area.