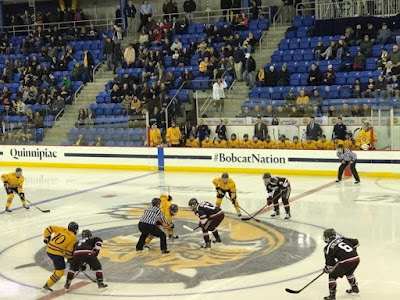 Quinnipiac is back on top of the ECAC standings after a 9th place finish a season ago. Picked to finish 8th, Quinnipiac played about expectations to win its fourth Cleary Cup in the last seven seasons sharing the cup with rival Cornell. For the first time since the 2015-2016 season, Quinnipiac spent the first week of the ECAC playoffs on a bye so the team should be healthy and ready to go for Game 1 on Friday night but the Bobcats will be without captain Chase Priskie for two games and Luke Shiplo for one game as both are suspended. Brown comes in fresh off a sweep of defending ECAC tournament champion Princeton.

Tale of the Tape:

This is a match-up that features two teams that have both exceeded pre-season expectations. Quinnipiac and Brown were both picked 8th and 11th by the ECAC media respectively. The Bobcats had a better season than anyone expected, finishing first and having one of the best producing freshman classes in the country which should lay the foundation for future great teams. Brown despite finishing 8th really came on in the second half of the season with good defense and solid goal-tending. Brendan Whittet's team is filled with overachievers and hard working players as this is a team that lacks star players. Quinnipiac on the other hand has many players up for ECAC and national awards.

Statistically, Quinnipiac has been one of the best teams in the country which helped pave the way for a 25 win season and an eventual berth into the NCAA tournament. This is a team that is in the top five nationally in the big four categories of goals for, goals allowed, power play and penalty kill. The team clearly has shown it is the real deal. They have a star goaltender in Andrew Shortridge, a star forward in Odeen Tufto and a star defenseman in Chase Priskie. The latter however is suspended for the first two games of this series stemming from a kicking incident against Yale. His loss could be a huge loss in the first two games as this is a Brown team that has shown it can beat Quinnipiac this season especially in Hamden. Overall this is an excellent Quinnipiac team with a lot of depth on the roster. However that defensive depth will be tested this weekend with many young players needing to step up in Peter Diliberatore, Zach Metsa, Cam Boudreau and also Marcus Chorney who should see some action. I also wouldn't be shocked to see Rand Pecknold think outside the box in filling for these defensive losses so keep that in mind. But if Quinnipiac can play to their identity and dictate the game they should be able to win this series.

Brown isn't a flashy team but they work well as a unit and play to the best of their abilities and play hard as a team. Sometimes those traits can make up for the lack of skill as we saw when they outworked Quinnipiac to a 4-1 victory in Hamden back in February. Brown has the ability to play a strong fore-checking game along with puck possession which has them become a better team this season. They are going to have to give that type of effort if they want to upset Quinnipiac. Captain Tommy Marchin leads the way for the Bears with 9 goals and 24 points. He has gotten some help from underclassmen Tristan Crozier, Chris Berger, Colin Burston and Justin Jallen that have really helped elevate Brown into a very competitive hockey team. Throw in upperclassmen Zach Giuttari, Brent Beaudoin, Alex Brink and Max Gottlieb, the Bears have a nice mix of youth and veterans which have helped get them to this point. Statistically they are a middle of the road team in goals for, goals allowed and penalty kill. On the power play is where they really struggle at just 13.7%. They really need to stay in a five on five game and use their strong fore-check in order to create turnovers into scoring opportunities. Gavin Nieto returns as the starter in net back from injury so he will give Quinnipiac a different look at the Bobcats only faced Luke Kania in their previous two meetings.

With the fact that Brown has already proven that they can win on Quinnipiac's home ice along with the suspensions of Chase Priskie and Luke Shiplo this series should be tougher than most expect. Brown has played very well in the second half of the season minus a late season swoon which saw them lose three of their four regular season games. They took care of Princeton in two games needing triple overtime in game two to seal the series win. Brown is a hard working over achieving team but they are now up against a pretty deep Quinnipiac team that won 25 games and is bound for the NCAA tournament. Even with the losses of two defensive players, Quinnipiac should have enough in the arsenal to move on to Lake Placid even if they are pushed in this series.