The No. 3/4 Quinnipiac Bobcats Men's Hockey team is spending the Thanksgiving holiday over in Belfast, Northern Ireland for the second annual Friendship Four tournament. The tournament is hosting Quinnipiac along with fellow ECAC rival Saint Lawrence and Hockey East teams UMass Amherst and Vermont. Quinnipiac will take on Saint Lawrence in an ECAC league game. This was previously a Quinnipiac home game they had given up to attend this tournament.

This is a tremendous experience for the program and these student athletes to take in the sights of both Dublin, Ireland and Belfast, Northern Ireland. But make no mistake about it; Rand Pecknold, his staff and these student athletes need to treat this as a business trip. Both of these games could have implications down the road in ECAC play and the pairwise so winning this tournament is pretty important. 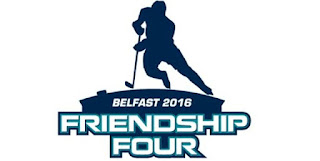 Quinnipiac kicks the tournament Friday against Saint Lawrence a team that shut out the Bobcats three weeks ago up in North Country. Saint Lawrence sits atop the ECAC standings with 11 points while Quinnipiac is a point behind at 10. That may not seem a lot but in the big picture if the Bobcats were to lose again to the Saint Lawrence they would be three points behind and the Saints would hold any tiebreaker against Quinnipiac down the road. Its very important that Quinnipiac takes care of business getting two points on Friday and not giving up any tiebreakers this early in the season. A win against the Saints will also give some bump to Quinnipiac's current pairwise (10) as they are an opponent in the top 20 (18th).

If Quinnipiac can win against Saint Lawrence the ideal opponent to face in the championship game would be the Vermont Catamounts. Why does Quinnipiac want to see a Vermont team who is 7-3-2 over a rematch against a UMass team that is 3-6-1? Shouldn't they want the easier path to a tournament title? Quinnipiac should want Vermont for pairwise implications only. They are currently ranked 14th in the pairwise versus 46th for UMass. Vermont has quality wins over Omaha, Michigan, Clarkson and Northeastern while the Minutemen don't have a quality win yet. Beating Vermont will give the Bobcats likely another quality win depending on how Vermont finishes the year.

Even though the calendar has not turned yet for the new year or even into December, getting certain wins early in the season will be important come March when the field of 16 is selected. The players and the staff can definitely enjoy the experience, see the sights but at the end of the day they need to treat this as a business trip.

Posted by Jonathan Singer at 9:43 AM